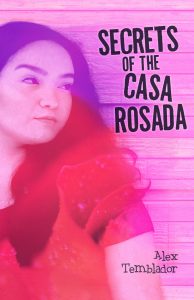 The Tejas Foco Young Adult Fiction Award recognizes outstanding work that best represents a significant topic related to Mexican American experience in Texas. The prize is given by the Texas chapter of the National Association for Chicana/o Studies (NACCS), an organization that serves academic programs, departments and research centers focusing on issues pertinent to Mexican Americans, Chicana/os and Latina/os. Formed in 1972 during the height of the Chicana/o movement, NACCS called for the development of a space where Chicana/o students could develop their talents in higher education.

Named to Kirkus Reviews’ Best Books of 2018, Secrets is an engaging novel for young adults that follows a family of women and the secrets they hold. Reviewers have enthusiastically recommended it:

“Debut novelist Temblador has created an unforgettable character in Martha, a girl whose gifts are greater than she could have imagined, in part because they belong to a world she never could have imagined. A suspenseful and fascinating glimpse into a Mexican-American world.”—Kirkus Reviews (Starred Review)

“Alex Temblador’s magical Secrets of the Casa Rosada follows Martha George, a sixteen-year-old girl whose rootless and impoverished life with her mother shifts. [It]is a fascinating story with a strong protagonist and a glimpse at some unique aspects of traditional Mexican culture.”—Foreword Reviews

“Temblador depicts Martha as a frustrated teenager who loves and respects the people around her while finding a newfound feeling of purpose and belonging when she assimilates into her community as her highly respected grandmother’s apprentice. It addresses the hard reality that nobody is perfect, even our guardians, and the slightly ambiguous conclusion is tantalizingly open to interpretation.”—Booklist

Alex Temblador, a freelance travel writer, is a graduate of the University of Louisiana at Monroe and received an MFA in Creative Writing from the University of Central Oklahoma. Born and raised in Wichita Falls, Texas, she lives and works in Dallas. This is her debut novel.