Houston Public Media radio host Eric Ladau interviewed Flores for its website’s “Arte Público Press Authors” feature, and along with the transcript, their conversation is available to listeners on the station’s interactive site through on-demand audio streaming here. 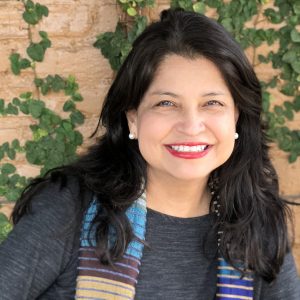 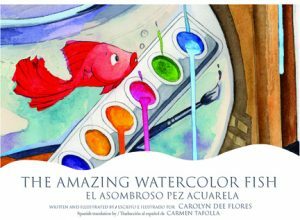 A lonely pet fish longs to know what exists in the world beyond her bowl. “I wish I could see over there / Behind the wall, / Behind the chair.” She imagines a giant tree, a wooly goat and a purple sea.

She wonders if there could be someone out there who looks like her, so she leans close to the glass and hears some fish-like cries! “Hello? Is someone there?” she hears. “Are you a bird? / Are you a bee? Or are you a fish with fins like me?” She realizes there’s another fish close by and his name is Mike!

When Mike asks what her world is like, the amazing watercolor fish has a great idea. “I’ll show Mike what I think could be!” Using watercolors, she paints a picture of a world with trees and swirling rainbows. Every day she paints more, “birds that swim, / ships with wings, / and books that do all sorts of things!” Then Mike uses his paint to illustrate more “than just the water and the door.”

In this fun, bilingual picture book with a lyrical Spanish translation by former Texas Poet Laureate Carmen Tafolla, two pet fish imagine a beautiful, mysterious world beyond their bowls. Children ages 4-8 will love following the progression of Carolyn Dee Flores’ gorgeous illustrations from black and white to full color as the fish become friends. Kids will be inspired to imagine—and maybe even paint or write about—a world beyond the one they know.