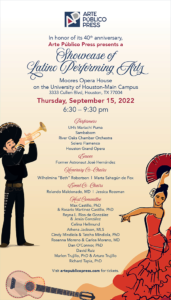 Bringing together outstanding artists from a variety of genres, the event will feature author and former astronaut José M. Hernández as the emcee and highlight the vibrant influence of Latin American and Latino cultures. The University of Houston’s Mariachi Puma will welcome attendees; other performers include the Brazilian dance and drum group, Sambabom; the River Oaks Chamber Orchestra, presenting a selection of Latino songs in honor of Arte Público Press; Solero Flamenco; and the Houston Grand Opera, doing its children’s production based on Jorge Argueta’s trilingual picture book, Agua, Agüita / Water, Little Water (Arte Público Press, 2017).

In addition, two children’s book awards will be given out that evening. Erika Said will accept the Salinas de Alba Award for Latino Children’s Literature for her picture book, El cumpleaños de mi hermana Dulce / My Sister Dulce’s Birthday, and Airy Sindik will accept the Reyes-Olivas Award for Best First Book of Latino Children’s and Young Adult Literature for his picture book, Abuela y el covid / Grandma and Covid.

Other authors will attend and autograph their books, including Jasminne Mendez, the writer of the acclaimed children’s book, Josefina’s Habichuelas / Las habichuelas de Josefina, and Islands Apart: Becoming Dominican American. A post-performance party in the lobby—with food, drink, author signings and entertainment—will wrap up the event.

Arte Público Press grew out of a literary magazine, Revista Chicano-Riqueña, founded by Dr. Nicolás Kanellos at Indiana University Northwest in 1972. The magazine later became The Americas Review, and many of the writers first published in its pages were those whose full-length books—novels, story and poetry collections—were issued by Arte Público after its founding in 1979. Dr. Kanellos and the press moved to the University of Houston in 1980. There it launched the Recovering the US Hispanic Literary Heritage project in 1991; its imprint for children and young adults, Piñata Books, in 1994; and numerous other projects, including the Hispanic Civil Rights Series and the US Latino Digital Humanities Center.

Piñata Books is dedicated to the authentic portrayal of the themes, languages, characters and customs of Hispanic culture in the United States; books published under the imprint serve as a bridge from home to school to support family literacy and elementary school education.

Arte Público Press, Piñata Books and the Recovering the US Hispanic Literary Heritage project provide the most widely recognized and extensive showcase for Hispanic literary arts and creativity.

HOUSTON GRAND OPERA (HGO) is one of the largest and most highly acclaimed opera companies in the United States. HGO has toured extensively and has won a Tony, two Grammy awards and three Emmy awards. It is the only opera company to win all three honors. HGO was the only American finalist for Opera Company of the Year at the 2019 International Opera Awards.

MARIACHI PUMA is the University of Houston’s mariachi ensemble, open to any student interested in learning this traditional Mexican musical style.

RIVER OAKS CHAMBER ORCHESTRA is a professional music ensemble based in Houston that incorporates players from all over the United States and Canada and guest conductors from all over the world. Performing intimate concerts in dozens of venues, ROCO’s musicians do not just give concerts—they challenge preconceptions, create extraordinary experiences and foster new relationships with audiences through the language of music.

SAMBABOM BRAZILIAN DANCE COMPANY was founded in Houston in 2010 and has become a diverse group of professional, Houston-based dancers.

SOLERO FLAMENCO, Houston’s premier flamenco performance company, presents the tradition, passion and energy of the art of flamenco through its compelling dancers and musicians.

JOSÉ M. HERNÁNDEZ is the author of The Boy Who Touched the Stars / El niño que alcanzó las estrellas (Piñata Books, 2019) and From Farmworker to Astronaut: My Path to the Stars / De Campesino a astronauta: Mi viaje a las estrellas (Piñata Books, 2019). The founder of Reaching for the Stars Foundation dedicated to increasing the number of students studying STEM fields, he lives in Stockton, California, where he is president and CEO of an engineering firm.

ERIKA SAID is the author of iPoems: Poemas en Shuffle (El Humo, Querétaro, 2013) and co-author of Fuego del Aire (Media Isla, 2015). Her work has been published in Mexican and US magazines such as Revista de Literatura Mexicana Contemporánea and Círculo de Poesía. Her writing has been anthologized in numerous books, including Lados B (Nitro Press, 2018), Viejas Brujas II (Aquelarré Editoras, México DF, 2017), Along the River II (VAO, McAllen, 2012) and El infierno es una caricia (Fidaura, Mexico DF, 2011). She is a Ph.D. student in the Creative Writing Program in Spanish at the University of Houston.

AIRY SINDIK, the author of Sin aire para el regreso. Novela de la primera intifada de la primavera árabe (UdeG, 2018), oversees Entre Autores, a forum for new authors at the Guadalajara International Book Fair, and Poiesis/Diáspora, a cultural and creative consultancy. He has taught communication at ITESO, the Universidad Jesuita de Guadalajara, since 2011 and is currently a Ph.D. student in the Creative Writing Program in Spanish at the University of Houston.