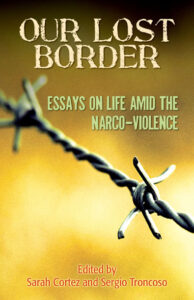 With a foreword by renowned novelist Rolando Hinojosa and comprised of personal essays about the impact of drug violence on life and culture in the border region, Our Lost Border: Essays on Life amid the Narco Violence puts a human face on the news stories.

Editors Sarah Cortez and Sergio Troncoso write that this anthology was “born of a vision to bear witness to how violence has shattered life on the border, to remember the past, but also to point to the possibilities of a better future.” Mexican authors Liliana Blum, Lolita Bosch, Diego Osorno and María Socorro Tabuenca write riveting, first-hand accounts about the clashes between the drug cartels and citizens’ attempts to resist the criminals. American authors focus on how the corruption and bloodshed have affected the bi-national and bi-cultural existence of families and individuals. Celestino Fernández and Jessie K. Finch write about the violence’s effect on musicians, and María Cristina Cigarroa shares her poignant memories of life in her grandparents’ home—now abandoned—in Nuevo Laredo.

In his essay lamenting the loss of the Tijuana of his youth, Richard Mora remembers festive nights on Avenida Revolución, where tourists mingled with locals at bars. Now, the tourists are gone, as are the indigenous street vendors who sold handmade crafts along the wide boulevard. “Multiple truths abound and so I am left to craft my own truth from the media accounts—the hooded soldiers, like the little green plastic soldiers I once kept in a cardboard shoebox, are heroes or villains, victims or victimizers, depending on the hour of the day,” Mora writes.

This collection is a must-read for anyone interested in how this fragile way of life—between two cultures, languages and countries—has been undermined by the drug trade and crime that accompanies it, with ramifications far beyond the border region.

Sarah Cortez is a poet, educator, and law enforcement officer. She is the author of a memoir, Walking Home: Growing Up Hispanic in Houston (Texas Review Press, 2012), and a poetry collection, How to Undress a Cop (Arte Publico Press, 2000), which won the PEN Texas Literary Award in Poetry. She is the editor of Windows into My World: Latino Youth Write Their Lives (Pinata Books, 2007), winner of a 2008 Skipping Stones Honor Award; Hit List: The Best of Latino Mystery (Arte Público Press, 2009); You Don’t Have a Clue: Latino Mystery Stories for Teens (Piñata Books, 2011) and Indian Country Noir (Akashic Books, 2010). She lives and works in Houston, Texas.
Sergio Troncoso is the author of Crossing Borders: Personal Essays (Arte Público Press, 2011), From this Wicked Patch of Dust (University of Arizona Press, 2011), The Nature of Truth (Northwestern University Press, 2003) and The Last Tortilla and Other Stories (University of Arizona Press, 1999), which won the Premio Aztlán and the Southwest Book Award. He received his undergraduate degree from Harvard College and two graduate degrees, in international relations and philosophy, from Yale University. He won a Fulbright scholarship to Mexico and was inducted into the Hispanic Scholarship Fund’s Alumni Hall of Fame. A resident faculty member of the Yale Writers’ Conference, he lives and works in New York City.