Are you looking for holiday gifts that are both educational and fun? Look no more! Below, we’ve assembled a brief collection of holiday-themed stories that will teach the little ones in your life about Christmas and El Día de los Reyes Magos, or Three Kings Day. These books are filled with vibrant illustrations that will engage children, while leading them to ask more questions. 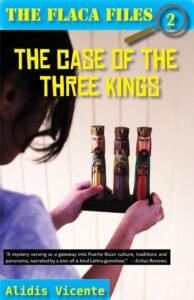 Flaca, or Detective Flaca as she prefers to be called, is pleased with her Christmas gifts. Finally, she has the tools needed to do her job: a fingerprint-taking kit, a police-quality mini flashlight, and most exciting of all, police tape to block off crime scenes! However, she is not at all pleased with the airline tickets to Puerto Rico she and her sister La Bruja are given. She has case deadlines to meet! La Bruja isn’t very happy either since their grandmother’s house doesn’t have air conditioning, cable TV or Wi-Fi.

Their parents are sure the girls will enjoy celebrating Three Kings Day, a huge holiday in Latin America that takes place on January 6 and involves putting grass in a box under the bed for the wise men’s camels. Three men on flying camels sounds very suspicious to Detective Flaca, who once again is faced with a case begging to be solved. Where do the Three Kings get the gifts to put in the boxes? Do they steal presents from Santa Claus? Or do they take them from under Christmas trees around the world?

The skinny second-grader first introduced in The Case of the Missing Chancleta and Other Top-Secret Cases / La chancleta perdida y otros casos secretos is back on the case in the second installment of the bilingual series, The Flaca Files / Los expedientes de Flaca. Narrated by Detective Flaca in hard-boiled detective style, this short, bilingual novel for intermediate readers will appeal to seasoned and reluctant readers alike. 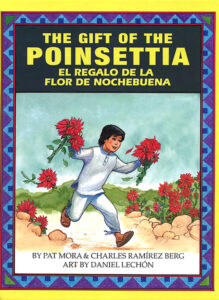 A beautifully illustrated picture book that depicts a poor Mexican boy’ search for a special gift for the Baby Jesus, The Gift of the Poinsettia / El regalo de la flor de Nochebuena focuses on the Mexican tradition of las posadas in which villagers reenact Mary and Joseph’s search for shelter for nine nights.

Traveling from house to house, night after night, Carlos worries each day about the gift he cannot afford to give the Baby Jesus on Christmas Eve. Following each evening of the posada, Carlos excitedly tells his aunt of the sounds, tastes, and songs of Christmas that he witnesses, but his joy is shadowed by his concerns. Following the advice of his beloved Tía Nina, Carlos decides upon a magical gift that stems from the love in his heart and blossoms through the strength of his love.

Written by acclaimed children’s book author Pat Mora, with Charles Ramírez Berg, and with illustrations by Daniel Lechón, this book is sure to warm children’s hearts while demonstrating the importance of love over material things. In addition to depicting the traditional Mexican custom of las posadas, the book also illustrates other Mexican traditions such as papel picado, cascarones, and piñatas. The book also includes the text and musical annotation for the traditional songs of las posadas. The Gift of the Poinsettia will delight both English and Spanish-speaking children. 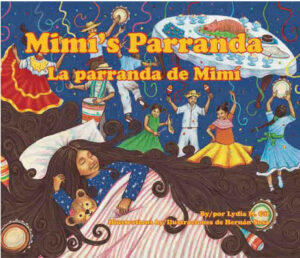 Like most young children, Mimí loves Christmas time, so much so that she doesn’t even mind the bitter cold. But while her friends plan to ask for skates, sleds, coats, and boots for Christmas, Mimí wants a straw hat, new sandals, a polka-dot bathing suit, and maybe even a beach ball. She’ll need toys and clothing for warm weather because she goes to Puerto Rico every Christmas, and she can’t wait to go again this year!

Mimí especially looks forward to her annual parranda, the Puerto Rican version of Christmas caroling. She loves it when everyone arrives late at night and wakes her up by playing their instruments—güiros, palitos, maracas, guitars, tambourines. And the food … she dreams about a table brimming with all her favorites: roasted pork, pasteles, and arroz con leche.

But when she learns that her family won’t be able to go to Puerto Rico this year, Mimí is crushed. She is so sad that she loses interest in her class’s holiday party, and on the day of the party, she decides to stay home in bed. Just as Mimí is falling asleep, though, she hears the unmistakable sounds of musical instruments. Could it be that she’ll get her parranda after all? 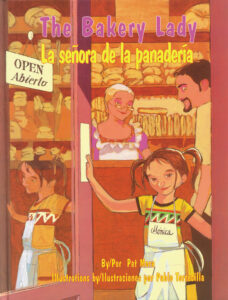 In this colorful bilingual picture book, Mónica yearns to be a baker, like her grandparents.  Her first real test comes as she and her beloved grandparents prepare for the coming celebration of January sixth, Three Kings Day, El Día de los Reyes Magos.  When Mónica finds the baby in the round bread ring that shines with cherries and pecans, the Kings’ Ring, it becomes her responsibility to plan the celebration: invitations, decorations, and most important of all, the lemon cookies that Mónica will bake especially for her family and friends.  And although she wants to do it all herself, she realizes the love and help of family can make any job a joy.

Pat Mora once again weaves a tale rich with tradition in which we become active participants in the wonderfully sweet world of la panadería. Children aged 3 to 7 will delight in the delicious sights and savory smells of the panadería and Mónica’s quest to be the next “Bakery Lady.”