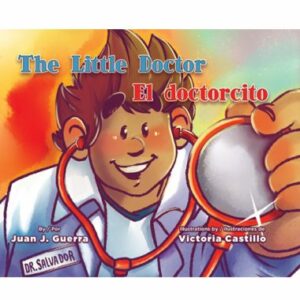 HOUSTON, TX June 2018—Juan Guerra’s bilingual picture book, The Little Doctor / El doctorcito, illustrated by Victoria Castillo, has been named a 2018 Américas Award Commended Title. The Américas Award is given in recognition of US works of fiction, poetry, folklore, or selected non-fiction (from picture books to works for young adults) published in the previous year in English or Spanish that authentically and engagingly portray Latin America, the Caribbean or Latinos in the United States. It is sponsored by the Consortium of Latin American Studies Programs (CLASP). The winning books will be honored at a ceremony on September 28, 2018 during Hispanic Heritage Month at the Library of Congress in Washington, DC.

The awards committee chose this engaging bilingual picture book because “[it] makes us aware of the diversity amongst Latinas/os while highlighting their shared cultural values of familism, empathy, education and hard work.” In Guerra’s debut title, a young Salvadoran boy dreams of becoming a doctor who speaks both English and Spanish so that patients like his beloved grandmother aren’t afraid to visit the doctor. One day, Salvador races home from school to find that his grandmother needs his help. She is going to the doctor and wants her grandson to interpret for her. Abuela is nervous because she has never been to a doctor in the United States. In El Salvador, she either saw a curandera or drank té de manzanilla when she felt sick.

When he learns that none of the physicians speak Spanish, the boy realizes that he is completely responsible for making sure the doctor understands his grandmother—and that she understands his instructions! But in spite of his help, the visit does not go well. Abuela is so upset that she threatens not to take the medication the doctor prescribes! What can Salvador do to help her? Paired with lively, colorful illustrations by Victoria Castillo, this book for ages 4-8 will encourage kids to think about their own futures as well as the role their culture can play in helping the community.

JUAN J. GUERRA, a doctor specializing in obstetrics and gynecology, is a graduate of Pomona College and the University of Illinois School of Medicine. He was four years old when his family emigrated from El Salvador to Los Angeles, California. He lives and works in northern California. This is his first picture book.

VICTORIA CASTILLO is an illustrator and comic artist. Her Colombian mother and Mexican father ensured that she was exposed to different cultures from an early age. She lives in Houston, Texas, with her family and numerous dogs. This is her first picture book.