KUHF radio host Eric Ladau interviewed Samuel Caraballo for its website’s “Arte Público Press Author of the Month” feature, and along with the transcript, their conversation is available to listeners on the station’s interactive site through on-demand audio streaming here.

Samuel Caraballo was born in Vieques, a gorgeous, tiny island off the East Coast of Puerto Rico. He spent many of his childhood days playing in the countryside hills and picking mango and guavas, his favorite tropical fruits. He has served as an interpreter for the courts for cases involving Hispanics. He has also dedicated many years to teaching Spanish in several public schools in the United States. He presently lives in Virginia with his family. He loves painting, fishing, and writing poetry. He is the author of three bilingual picture books for children, Estrellita se despide de su isla / Estrellita Says Good-bye to Her Island (Piñata Books, 2002) and Mis abuelos y yo/My Grandparents and I (Piñata Books, 2004) and My Big Sister / Mi hermana mayor (Piñata Books, 2012).

About his latest book, My Big Sister/ Mi hermana mayor: 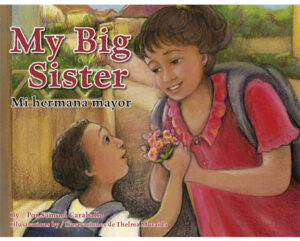 In this tender, bilingual tribute to his big sister, Pablito recounts all the things she does for him while their parents are at work, sewing “jeans for the whole world.”

Anita wakes him up and makes his breakfast, “Yummy! Yum! / Hot, creamy oatmeal / topped with blueberries and raisins.” She holds his hand while walking him to the bus stop, and when the bus arrives, “I wrap my arms around her. / She tattoos a red kiss on my cheek.” Anita is there to greet him when the yellow school bus drops him off in the afternoon, and she helps him with his homework, “just like Mom and Dad.”

When Pablito’s homework is done, they go outside and play soccer. Then it’s time for dinner, a shower and a book in bed. And finally, their parents are home. “They praise my sister / because she is that big sister any brother would wish for!” And affectionate Pablito is surely the younger brother all kids want.

Caraballo’s sweet lyrical ode to an older sibling, warmly depicted by illustrator Thelma Muraida, will resonate with young children ages 3 to 7 who rely on brothers and sisters to help with meals, homework, and fun!