Saldaña, Jr. chosen as May 2009’s “Author of the Month” on Houston Public Media

Houston Public Media radio host Eric Ladau interviewed Saldaña, Jr. for its website’s “Arte Público Press Author of the Month” feature, and along with the transcript, their conversation is available to listeners on the station’s interactive site through on-demand audio streaming here.

RENÉ SALDAÑA, JR. is the author of several acclaimed books for children and young adults. He lives in Lubbock, Texas, where he teaches in the College of Education at Texas Tech University. The Case of the Pen Gone Missing / El caso de la pluma perdida (2009) is the first book in the bilingual Mickey Rangel Mystery series. 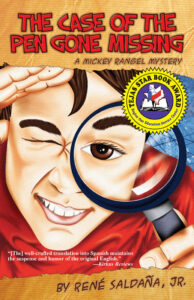 When Toots Rodríguez approaches Mickey on the playground, he knows something is up. Toots, the prettiest girl in the fifth grade, never talks to Mickey, not even when they’re assigned to work together on a class project. But Toots has come to Mickey because she’s in trouble, and he’s a detective. The real deal. He has a badge and a certificate after completing an online course two years ago.

“You have to believe me, Mickey. I didn’t take that pen. I didn’t.” When Toots shines her big green eyes on him and insists repeatedly that she’s innocent, Mickey’s intuition tells him to run fast—in the opposite direction. But he’s a sucker for a pretty girl, so he takes on the case of the missing pen.

Rumor has it that Toots stole Eddy’s pen. It’s not just any old pen; it’s his dad’s pen. It has the White House logo on it. Eddy’s father, a senator from South Texas, got the pen from the President of the United States when he visited the White House last year. As Mickey begins his investigation, though, all the clues point to Toots and her newly ex-boyfriend as the primary suspects.

The first book in The Mickey Rangel Mystery series for intermediate readers, author, and educator René Saldaña, Jr. has crafted another appealing book for kids, and his wise-cracking, smart protagonist will appeal to even the most reluctant readers.