Houston Public Media radio host Eric Ladau interviewed Colato Laínez for its website’s “Arte Público Press Author of the Month” feature, and along with the transcript, their conversation is available to listeners on the station’s interactive site through on-demand audio streaming here.

RENÉ COLATO LAÍNEZ came to the United States from El Salvador as a teen, and he writes about his experiences in bilingual children’s books such as Waiting for Papá / Esperando a Papá (Piñata Books, 2004), I Am René, the Boy / Soy René, el niño (2005) and René Has Two Last Names / René tiene dos apellidos (2009). He is also the author of Playing Lotería / El juego de la lotería (Luna Rising, 2005), My Shoes and I (Boyds Mills Press, 2010), The Tooth Fairy Meets El Ratón Pérez (Tricycle Press, 2010), and From North to South / Del norte al sur (Children’s Book Press, September 2010). René is a graduate of the Vermont College MFA program in Writing for Children & Young Adults and a bilingual elementary teacher at Fernangeles Elementary School in the Los Angeles Unified School District.

René is also a children’s literature columnist for La Bloga, the blog for Latino literature; Los Bloguitos, the blog for children who are learning to speak Spanish; and Revista Iguana, a Spanish-language children’s magazine. He was named one of the “Top Ten New Latino Authors to Watch (and Read)” by latinostories.com. 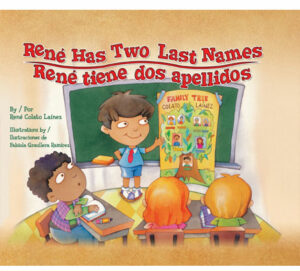 “On the first day at my new school, my teacher, Miss Soria, gave me a sticker that said René Colato. The sticker was missing my second last name. Maybe Miss Soria’s pen ran out of ink. I took my pencil and added it. Now it looked right: René Colato Laínez.”

Young René is from El Salvador, and he doesn’t understand why his name has to be different in the United States. When he writes Colato, he sees his paternal grandparents, René and Amelia. When he writes Laínez, he sees his maternal grandparents, Angela and Julio. Without his second last name, René feels incomplete, “like a hamburger without the meat or a pizza without cheese or a hot dog without a wiener.”

His new classmates giggle when René tells them his name. “That’s a long dinosaur name,” one says. “Your name is longer than an anaconda,” another laughs. But René doesn’t want to lose the part of him that comes from his mother’s family. So when the students are given a project to create a family tree, René is determined to explain the importance of using both of his last names. On the day of his presentation, René explains that he is as hard working as Abuelo René, who is a farmer, and as creative as his Abuela Amelia, who is a potter. He can tell stories like his Abuelo Julio and enjoys music like his Abuela Angela.

This charming bilingual picture book for children ages 4 – 8 combines the winning team of author René Colato Laínez and illustrator Fabiola Graullera Ramírez, and follows their award-winning collaboration, I Am René, the Boy / Soy René, el niño. With whimsical illustrations and entertaining text, this sequel is sure to please fans and gain many new ones while explaining an important Hispanic cultural tradition.