Houston Public Media radio host Eric Ladau interviewed Ray Villareal for its website’s “Arte Público Press Author of the Month” feature, and along with the transcript, their conversation is available to listeners on the station’s interactive site through on-demand audio streaming here.

RAY VILLAREAL is the author of two novels for young adults that capture the angst of adolescent life: Alamo Wars (Piñata Books, 2008), and My Father, the Angel of Death (Piñata Books, 2006), which was nominated to the 2008-2009 Lone Star Reading List and named to The New York Public Library’s 2007 Books for the Teen Age. Villareal worked for 30 years as a teacher and an instructional reading coach with the Dallas Independent School District, and his knowledge of kids is obvious in his characters’ dialogue and the problems they deal with. He graduated in 1981 from Southern Methodist University with a Bachelor of Arts in Elementary Education with an emphasis in Bilingual Education. In 1991, he completed his Master of Liberal Arts from the same university. He lives with his family in Dallas, Texas.

About his latest book, Alamo Wars: 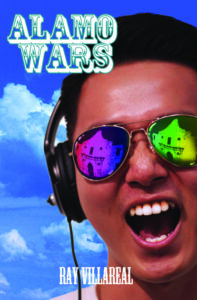 Josephine “Miss Mac” McKeever had taught English and theatre arts at Rosemont Middle School for so long that her colleagues sometimes joked that she would die in the classroom. So when she does just that, students, teachers, and administrators are stunned.

After getting over the initial shock of losing their colleague, the staff agrees that they need to do something very special to acknowledge Miss Mac’s fifty-one years of dedication to the students at Rosemont and suggest naming the school’s auditorium after her. When Mrs. Frymire, her long-time colleague and friend, discovers a play written by Miss Mac years before, she knows that it would be the perfect memorial to present the play, Thirteen Days to Glory: The Battle of the Alamo, in the school’s auditorium named after her friend.

But the teachers quickly learn that presenting a play isn’t as easy as Miss Mac had always made it seem, and soon the entire school community is in an uproar as conflicts related to the play emerge.

Weary from struggling with disruptive kids, teachers and kids dropping out of the play, and parents with unreasonable expectations, everyone begins to wonder if they should just give up and cancel the production. Is it too much to expect everyone to work together to pay homage to a long-time friend and teacher?