Houston Public Media radio host Eric Ladau interviewed Valdez for its website’s “Arte Público Press Author of the Month” feature, and along with the transcript, their conversation is available to listeners on the station’s interactive site through on-demand audio streaming here.

LUIS VALDEZ is acknowledged as the founder of modern Chicano theatre and film. He was born to migrant farmworkers and spent his early life traveling and working in the fields. He eventually found himself at San Jose State College, where his play “The Shrunken Head of Pancho Villa” was staged in 1964. He later joined the United Farm Workers and staged improvisational theatre with the help of union actors to further their causes. This work led to the formation of his theater group, El Teatro Campesino, which produced most of Valdez’ early plays in both the US and Europe. His account of racism in 1940s Los Angeles, Zoot Suit (Arte Público Press, 1981), was released in 1982, and was the first play by a Mexican American to be performed on Broadway. His film “La Bamba” (1987), the tragic story of singer Ritchie Valens, proved wildly successful and launched the screen careers of Lou Diamond Philips and Esai Morales.  He has also written another collection of plays, The Mummified Deer and Other Plays (Arte Público Press, 2005), and a compilation of his works, Luis Valdez – Early Works, was published by Arte Público Press in 1990. He is a faculty member and the founding director of the Teledramatic Arts and Technology Department at California State University, Monterey Bay. He continues to travel extensively while remaining true to his Chicano theatrical roots.

About his latest book, Zoot Suit: A Bilingual Edition: 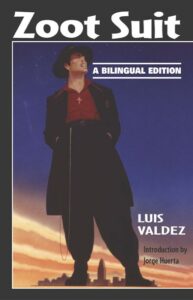 This bilingual edition combines the original English-language version with the first-ever Spanish translation of the critically acclaimed play by Luis Valdez, a work that cracked open the depiction of Chicanos on the stage, challenging viewers to revisit a troubled moment in our nation’s history. From the moment the myth-infused character El Pachuco burst onto the stage, literally cutting his way through the drop curtain with a switchblade, Valdez spurred a revolution in Chicano theater.

Focusing on the events surrounding the Sleepy Lagoon Murder Trial of 1942 and the ensuing Zoot Suit Riots that turned Los Angeles into a bloody war zone, this is a gritty and vivid depiction of the horrifying violence and racism suffered by young Mexican Americans on the home front during World War II.  Valdez’s cadre of young urban characters struggle with the stereotypes and generalizations of America’s dominant culture, the questions of assimilation and patriotism, and a desire to rebel against the mainstream pressures that threaten to wipe them out.

Experimenting with brash forms of narration, pop culture of the war era, and complex characterizations, this quintessential exploration of the Mexican-American experience in the United States during the 1940s was the first, and only, Chicano play to open on Broadway.