KUHF radio host Eric Ladau interviewed Josefina López for its website’s “Arte Público Press Author of the Month” feature, and along with the transcript, their conversation is available to listeners on the station’s interactive site through on-demand audio streaming here.

JOSEFINA LÓPEZ is best known for authoring the play and co-authoring the film Real Women Have Curves, a coming-of-age story about Ana, a first-generation Chicana torn between pursuing her college ambitions, a personal goal, and securing employment which is a family expectation. Along the way, Ana confronts a host of cultural assumptions about beauty, marriage and a woman’s role in society. Although Real Women Have Curves is Lopez’ most recognized work, it is only one of many literary and artistic works she has created since her artistic career began at 17. Born in San Luis Potosi, Mexico in 1969, Josefina Lopez was five years old when she and her family immigrated to the United States and settled in the East Los Angeles neighborhood of Boyle Heights. Josefina was undocumented for thirteen years before she received Amnesty in 1987 and eventually became a U.S. Citizen in 1995.

Josefina has been an activist and has been doing public speaking for over 20 years and has lectured on various topics including Chicano Theater, Women’s History Issues, Minority representation in Cinema at over 200 universities such as Yale, Dartmouth, and USC. She also has a magazine column called “Ask A Wise Latina”. She has been the subject of countless TV & Radio interviews in which she has passionately discussed immigration issues and other controversial subjects concerning women and minorities.

Josefina is the recipient of a number of other awards and accolades, including a formal recognition from U.S. Senator Barbara Boxer’s 7th Annual “Women Making History” banquet in 1998; and a screenwriting fellowship from the California Arts Council in 2001. She and Real Women Have Curves co-author George LaVoo won the Humanitas Prize for Screenwriting in 2002, The Gabriel Garcia Marquez Award from L.A. Mayor in 2003, and the Artist-in-Residency grant from the NEA/TCG for 2007.

Even though she is best known for the success of Real Women Have Curves, Josefina has had more than 80 productions of her plays throughout the United States. In addition, Josefina also paints, writes poetry, performs, designs, and is a mother of two boys and resides in Silver Lake. She is the Founder and Artistic Director of CASA 0101 Theater in Boyle Heights. At CASA 0101 her commitment is to teach screenwriting and playwriting and nurture a new generation of Latino artists. Josefina is actively working to create an Artist District in Boyle Heights where theater, arts, music can flourish and create opportunities for the many talented artists who reside in Boyle Heights or grew up in Boyle Heights and want to return to contribute.

Josefina is presently developing the musical version of Real Women Have Curves for Broadway. Her first novel titled Hungry Woman in Paris came out in 2009. She wrote a play to protest SB1070 titled Detained in the Desert, which she adapted into a film. She is working on her next novel The Ave Maria B & B and numerous other writing projects. For more information please go to josefinalopez.co. 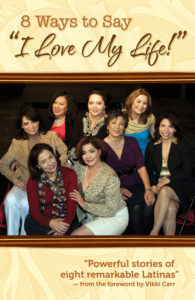 If you don’t do anything, nothing will happen.” Nancy De Los Santos Reza learned this important lesson early in life. College wasn’t an option, so she got a job as a secretary. A colleague, an older woman who had taken a liking to her, encouraged Nancy to ask her supervisor about attending a professional conference in California. “What’s the worst that could happen?” the woman asked. “They say ‘no’ and you don’t go? You’re already not going.” As a result, Nancy found herself in San Francisco on a life-changing trip. She would go on to earn two college degrees and become the producer of Roger Ebert and Gene Siskel’s movie review program, At the Movies.

De Los Santos Reza’s is one of eight inspiring personal essays by Latinas included in this collection. Each contributor overcame obstacles to happiness and success, and here they share their life lessons in the hopes of motivating others. Whether overcoming fear, guilt or low self-esteem, these women seek to encourage others to discover their personal power.

With a foreword by acclaimed musician Vikki Carr, 8 Ways to Say “I Love My Life!” contains chapters by women from a variety of professional backgrounds. Contributors include Latin Heat president Bel Hernandez Castillo and playwright and author of Real Women Have Curves, Josefina Lopez.

Performed as monologues in 2009 in Los Angeles, the sold-out, ten-run show received a rave review in the Los Angeles Times and an Imagen Award, which recognizes positive portrayals of Latinos in the media. Designed to help women believe in the power of self-love and inner strength, this book will appeal to all women who seek a path to fulfillment.