KUHF radio host Eric Ladau interviewed Alberto Hidalgo-Robert for its website’s “Arte Público Press Author of the Month” feature, and along with the transcript, their conversation is available to listeners on the station’s interactive site through on-demand audio streaming here. 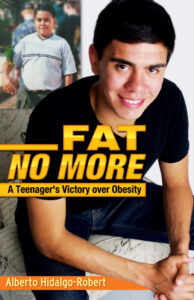 ALBERTO HIDALGO-ROBERT is the author of Fat No More: A Teenager’s Victory over Obesity (Piñata Books, 2012), a timely memoir about a young adult’s battle with weight. In an absorbing account of his personal struggle, Hidalgo-Robert writes about his life from the low point of his descent into obesity, to how he was able reinvent himself and become a model for other teenagers who are battling weight issues. Each chapter contains “battling” tools, examples of both good and bad behavior and typical self- deceptions in the war to conquer oneself and live a healthier life. Hildago- Robert studies biochemistry at Notre Dame de Numar University in Belmont, California. He is also the founder of an online anti-obesity campaign, Healthy Bert: No Child Left with a Big Behind Foundation. He lives with his family in Redwood City, California.

“My life was a circus and a comedy show by the age of three months: I was already the size of a one-year-old! I was hairy with big cheeks, big legs, feet akin to tamales and hands like an over-stuffed pita bread,” writes twenty-year-old Alberto Hidalgo-Robert in this fascinating memoir about his lifelong struggle with obesity.

The first grandchild born into his family in El Salvador, Alberto is showered with attention and gifts. Soon, though, he is known as “El Gordito,” or the little fat boy. By the age of seven, he weighed a whopping 120 pounds and his pediatrician had started him on a diet. By the time he was nine he had tried ten different diets. His life became a vicious cycle of eating to excess, sneaking food and lying to himself and his parents; he was the butt of practical jokes and teased by peers and strangers, ultimately turning into a recluse, addicted to food and television.

From the low point of his descent into obesity hell, Hidalgo-Robert chronicles how he was able to take hold of his life, reinvent himself and become a model for other teenagers who are battling weight issues. A spirited tale of a young man who lost his way, this book offers a roadmap for living a healthy life and regaining self-respect and social acceptance. Each chapter contains “battling” tools, examples of both good and bad behavior and typical self-deceptions in the war to conquer oneself and live a healthier life. He even includes easy-to-make recipes for delicious foods that will appeal to any teenager.

An absorbing account of one young person’s attempts to deal with obesity, this cautionary tale is for anyone interested in this country’s leading health issue.