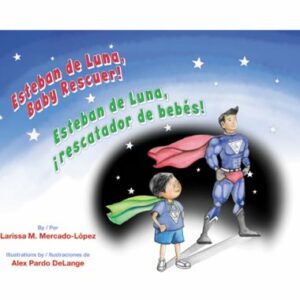 HOUSTON, TX May 2018—Larissa Mercado-López’s bilingual picture book, Esteban de Luna, Baby Rescuer! / Esteban de Luna, ¡rescatador de bebés!, has been recognized as an Honor Book in the 2018 Paterson Prize for Book for Young People. Books published for children and young adults in 2017 were eligible for the Paterson Prize, awarded by the Poetry Center at Passaic County Community College in Paterson, New Jersey.  For thirty-seven years, the center has garnered international recognition for many of its activities including the Distinguished Poets Series, the Allen Ginsberg Poetry Awards, the Paterson Poetry Prize, the Paterson Fiction Prize and the Paterson Prize for Books for Young People.

In Larissa Mercado-López’ debut, a kind and compassionate boy learns he can be a superhero even without supernatural powers. Esteban wears his green cape every day. The only problem is that it doesn’t do anything: it doesn’t help him fly or make him invisible. One day at the park, he rescues an abandoned doll from an impending storm, using his cape as a sling. On the way home he jumps over puddles and walks under awnings to keep the baby dry. At home, he wears the doll in his cape as he plays and does his chores. That night—with the baby clean and dry—the boy feels like a superhero. With whimsical illustrations by Alex Pardo DeLange, Esteban de Luna, Baby Rescuer! / Esteban de Luna, ¡rescatador de bebés! will generate dialogue about what it means to be a boy while broadening the definition of masculinity to include tenderness and caring.

The book has received positive praise from the trade media:

LARISSA M. MERCADO LÓPEZ, a Texas native and the mother of four children, is a professor of Women’s Studies at California State University, Fresno. She received her doctorate in English literature from the University of Texas at San Antonio. This is her first book for children.

ALEX PARDO DELANGE is a Venezuelan-born artist educated in Argentina and the United States. A graduate in Fine Arts from the University of Miami, she has illustrated numerous Piñata Books for children, including the Pepita series, The Empandas That Abuela Made / Las empanadas que hacía la abuela and Sip, Slurp, Soup, Soup / Caldo, caldo, caldo. She lives with her family in Florida.