Houston Public Media radio host Eric Ladau interviewed Contreras for its website’s “Arte Público Press Authors” feature, and along with the transcript, their conversation is available to listeners on the station’s interactive site through on-demand audio streaming here. 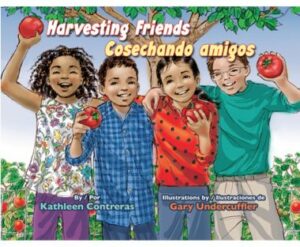 Young Lupe loves helping her mother with their salsa garden full of tomatoes, chile peppers, onions, garlic, and cilantro. But one summer day, she sees that the biggest, juiciest tomatoes have disappeared! Who could have taken them?!?

Two weeks later, she catches the culprit in the act! It’s Antonio, the new boy at school. His family doesn’t have much money and the tomatoes look so good. He offers his gold necklace from his grandmother in Mexico in exchange for the tomatoes, but Lupe has a better idea. “Let’s make a deal. You help me with the garden, and I’ll give back your necklace and some tomatoes.” They become friends over the summer as they weed, water and pick vegetables. When the growing season ends and they have composted the leaves and stems, Lupe happily returns Antonio’s necklace.

The following year, Lupe and Antonio invite their neighbors to help with the garden. Soon everyone is pitching in to grow fruit and vegetables for salsa and much more, from tomatoes to watermelon, squash, beans, and corn—America’s first crops.

Including easy-to-make recipes, this bilingual picture book for children ages 4-8 will have them clamoring for a garden of their own to plant and harvest. Along the way, young readers—and the adults in their lives too—will learn that coming together as a community will enable them to harvest more than just vegetables.