Houston Public Media radio host Eric Ladau interviewed Zepeda for its website’s “Arte Público Press Author of the Month” feature, and along with the transcript, their conversation is available to listeners on the station’s interactive site through on-demand audio streaming here.

About her latest book, Level Up / Paso de nivel 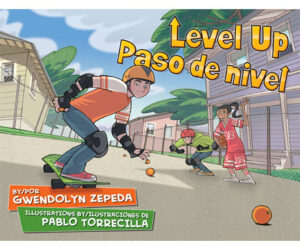 David is obsessed with reaching the next level in his favorite video game. Whether he’s playing BunnyBot Fighters or Ultimate Rhino Races, he’s so single minded in his pursuit of reaching the next level that he turns down invitations from friends to play outside. But one day, his game quits working, and he’s on “Level Sad.” So, with nothing else to do, he reluctantly goes outside to play.

“Today I’m trying to skateboard. I have to learn to stand on the skateboard while it rolls, without falling off. It feels like I’m on Level One of a really hard game.” But if he can master staying on the board, his friend Michael will show him how to do turns, and “that’ll be like Level Two.” Soon, David is doing turns and is ready to learn how to do jumps!

Still unable to play video games, David lets his friend Bianca convince him to try playing basketball. Dribbling is hard, but David wants to level up so he’ll get a new red jersey. Pretty soon, he’s on Level 12 of skateboarding and Level 8 of basketball, and he’s ready to try diving and dirt biking. Eventually, his video game is fixed, but by then he has discovered that leveling up in real life is more exciting than leveling up on the screen.

Popular kids’ book author Gwendolyn Zepeda teams up again with artist and illustrator Pablo Torrecilla to create a lively story that will have young readers laughing in commiseration with a kid consumed by imaginary goals. Following up on their acclaimed I Kick the Ball / Pateo el balón, this talented pair has once again crafted an appealing bilingual picture book that will encourage kids ages 5 to 9 to get off the couch and get moving.