Houston Public Media radio host Eric Ladau interviewed Ramos for its website’s “Arte Público Press Authors” feature, and along with the transcript, their conversation is available to listeners on the station’s interactive site through on-demand audio streaming here. 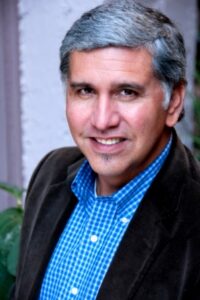 HENRY A. J. RAMOS is Principal of Mauer Kunst Consulting, a private research and advising firm working with social investors and public interest nonprofit groups. He is past Executive Director of Equal Voice Action, a national membership organization of poor and low-income families seeking enhanced political and economic empowerment, and past President and CEO of the Insight Center for Community Economic Development, one of the nation’s leading applied research centers on issues of economic mobility and justice.

Prior to the Insight Center, Ramos served on the program staffs of the Ford Foundation, the James Irvine Foundation and the Levi Strauss Foundation. From 2007-2010, he served as director and lead consultant of the Diversity in Philanthropy Project, an initiative of leading U.S. private foundations to increase philanthropic effectiveness through the greater inclusion of multicultural talent in foundation appointments, investments and contracting.

Ramos, a California native, received a bachelor’s degree with honors from the University of California at Berkeley, a Master’s in Public Administration from Harvard University and a Juris Doctorate from UC Berkeley Law School.

About his new book, Democracy and the Next American Economy: 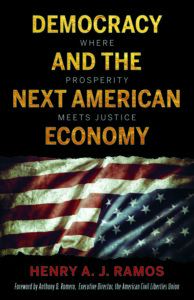 Progressive intellectual Henry A. J. Ramos believes the United States is at a crossroads, facing the most challenging moment since the civil rights movement of the late 1960s and early 1970s. In fact, absent major new interventions and investments, he sees this moment as a pivotal turning point in the American journey in which political polarization, income and wealth disparity and public violence—much of which is race related—threaten the very essence and integrity of our democracy and economy.

Ramos examines the policies that have contributed to America’s decline, including those that have led to the concentration of great wealth in the hands of a few while condemning many to systemic poverty and inequality. Current economic and social trends, he stresses, are unsustainable and call for organized, concerted action by people of conscience and those affected.

Ultimately, Ramos provides a roadmap for the future so the United States can continue to provide opportunities for its people and serve again as a leader in the international community.  He offers case studies of organizations that have successfully created and administered programs that further equity in society, restore democratic practices, implement better urban and city planning and protect the environment.

Demonstrating both the critical importance and real possibility of leveraging prosperity and justice for all Americans, this compelling work is a must-read for anyone interested in democracy, economic restoration and environmental sustainability.