Houston Public Media radio host Eric Ladau interviewed Gallardo for its website’s “Arte Público Press Authors” feature, and along with the transcript, their conversation is available to listeners on the station’s interactive site through on-demand audio streaming here.

YOLANDA GALLARDO is a poet, playwright and novelist born in the Bronx to parents of Cuban and Venezuelan/Puerto Rican heritage.
Her play, Everybody Knows My Business, has been performed in Puerto Rico and optioned for Off Broadway. She’s the author of a digital poetry collection, The Fragile Thread (Word Wrangler Press), and her poems have been published in journals including Long Shot Magazine and Chiricú. She lives and works in Bronxville, New York.

About her new book, The Glass Eye: 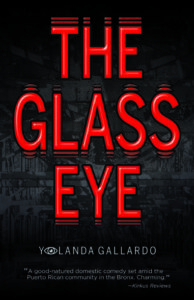 Doña Amada can see more through one eye than most people can see with two. She can see the past and the future, in spite of the shiny marble serving as her second eye, which was ripped out by her husband’s jealous lover.

Gossip and speculation about the mysterious disappearance of Amada’s rival swirl around the neighborhood. Rumor has it her remains are buried, scattered in parts of Westchester County. Others swear they have seen her ghost—having collected all her essential parts—swimming in the river, trying to make her way back to the Bronx.

Gallardo’s comic novel about a Puerto Rican community in New York introduces a cast of quirky characters, including Amada’s husband, Alberto, or Albertico as the adoring women call him, and her mother Esperanza, who everyone knows is a witch. Family feuds, births and deaths, christenings and funerals—and even a lost, wandering spirit—are hilariously sketched in this short novel about an eccentric Cuban/Nuyorican family and the neighbors who delight in their shenanigans and missteps.