Houston Public Media radio host Eric Ladau interviewed Gaspar de Alba for its website’s “Arte Público Press Author of the Month” feature, and along with the transcript, their conversation is available to listeners on the station’s interactive site through on-demand audio streaming here.

ALICIA GASPAR DE ALBA is the author of various works of poetry, fiction and nonfiction, among them a Lambda Award-winning novel, Desert Blood: The Juárez Murders (Arte Público Press, 2005), a collection of poems and essays, La Llorona on the Longfellow Bridge: Poetry y Otras Movidas (Arte Público Press, 2003) and a historical novel, Sor Juana’s Second Dream (University of New Mexico Press, 1999). She is also the editor of Making a Killing: Femicide, Free Trade, and La Frontera (University of Texas Press, 2010) and Our Lady of Controversy: Alma López’s “Irreverent Apparition” (University of Texas Press, 2011). A full professor of Chicana/o Studies, English and Gender Studies at the University of California-Los Angeles, Gaspar de Alba is a native of the El Paso/Juárez border. She is married to the artist, Alma López.

About her latest book, Calligraphy of the Witch 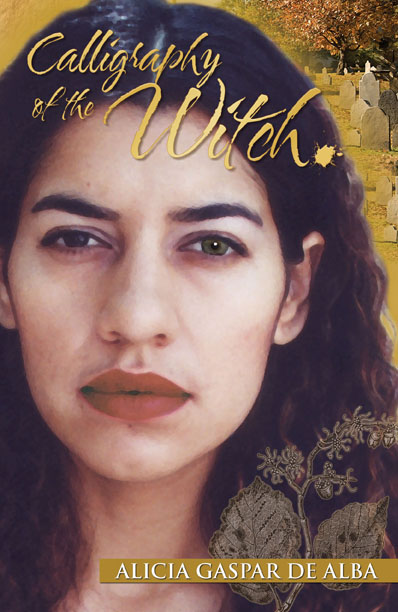 Born of a Spaniard and a mixed-race woman, young Concepción Benavidez was apprenticed as a scribe to a convent. At nineteen, she escapes and is captured in the siege of Vera Cruz in 1683. She unexpectedly becomes the property of the Dutch pirate Laurens-Cornille de Graffe, who rapes her repeatedly on the long, deadly journey to the Massachusetts Bay Colony where he will sell his cargo. Realizing the young mestiza has fine penmanship, the pirate promptly sells her when they reach the cold New England coast.

Concepción is thrust into a strange world where she doesn’t understand the language or the customs. Bought by a prominent Puritan, Merchant Greenwood, to tend to his old father-in-law and his chicken farm, the girl from New Spain is regarded with suspicion. She is considered a papist half-breed who speaks the language of the devil and practices an ungodly religion. Greenwood immediately forbids her to speak her native tongue, and he changes her name to Thankful Seagraves.

The merchant’s barren wife discovers that the girl is pregnant with the pirate’s child. And she covets the baby. In the following years, the two women spar for the child’s love and affection. But when several women in Salem Village, including Concepción’s friend Tituba Indian, are imprisoned for witchcraft, it’s not long before people—and even her own daughter—start whispering about Concepción.  After all, doesn’t she keep a cat for a familiar and burn letters for the dead in the woods?  Doesn’t she appear lasciviously in men’s dreams? How else could she have coerced the old man to marry and free her?

This riveting historical novel combines the horror of the Salem witch trials with the philosophy and poetry of the nun and writer known as the first feminist of the Americas, Sor Juana Inés de la Cruz. Meticulously researched and elegantly written, this novel takes a mesmerizing look at women in the New World in the 17th century and the stubborn men who accuse them for no reason.