A new online radio show, “Soulful Afrowith Yvette,” will air the 3rd Thursday of every month from 7-8 PM on www.africanradioonline.com. Soulful Afro will be about current headlines, health, women’s issues, spirituality, love and various topics related to the African Diaspora. The show will be an extension of the work by Yvette Modestin an activist, writer, and poet from Panama. It will be bilingual and will bring you closer to the latest soulful happenings on people of African descent in Latin America and the Caribbean.

The first show will air on January 24th, and feature a surprise guest.

YVETTE MODESTIN, a writer and activist focusing on Afro-Latino issues, was born and raised in Colon, Panama. She is the founder/director of Encuentro Diaspora Afro in Boston, Massachusetts, which mobilizes the Afro-Latino community, empowers young girls of African descent and builds bridges of understanding between African Americans and Latinos. She is currently the Diaspora/Canada Coordinator of the Red/Network de Mujeres AfroLatinoamericanas, Afrocaribenas y de la Diaspora. Ms. Modestin has been profiled by the Boston Globe as “The Uniter” for her work in bringing the Latin American and African American communities together and for her activism in building a voice for the Afro Latino Community. In 2006 she was highlighted as “Six in the City” by the Boston Globe for her service in the community. Ms. Modestin looks to continue creating a space to address race in the Latino community and the recognition of the Afro-Latino/a experience and the commonalities of Africans in the Diaspora and credits her spiritual discipline to keeping her steadfast on her journey for social justice for her people. Ms. Modestin has received numerous awards for the work in the community and sits on many boards that address such issues as Afro-Latinas and empowerment of communities of color.

About Women Warriors of the Afro-Caribbean Diaspora: 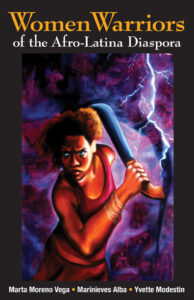 Eleven essays and four poems make up this volume in which Latina women of African descent share their stories. The authors included are from all over Latin America—Brazil, the Dominican Republic, Haiti, Panama, Puerto Rico, and Venezuela—and they write about the African diaspora and issues such as colonialism, oppression, and disenfranchisement. Diva Moreira, a black Brazilian, writes that she experienced racism and humiliation at a very young age. The worst experience, she remembers, was when her mother’s bosses told her she didn’t need to go to school after the fourth grade, “because blacks don’t need to study more than that.”

The contributors span a range of professions, from artists to grass-roots activists, scholars and elected officials. Each is deeply engaged in her community, and they all use their positions to advocate for justice, racial equality and cultural equity. In their introduction, the editors write that these stories provide insight into the conditions that have led Afro-Latinas to challenge systems of inequality, including the machismo that is still prominent in Spanish-speaking cultures.

A fascinating look at the legacy of more than 400 years of African enslavement in the Americas, this collection of personal stories is a must-read for anyone interested in the African diaspora and issues of inequality and racism.