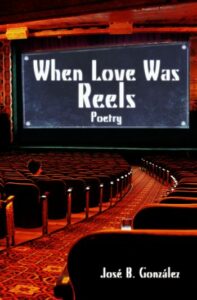 HOUSTON, TX June 2018—José B. González’ moving collection of narrative poems, When Love Was Reels, was named a finalist in Best Poetry Book category of the 20th annual International Latino Book Awards sponsored by Latino Literacy Now, a non-profitorganization that supports and promotes literacy and literary excellence within the Latino community. LLN created the International Latino Book Awards in 1999 to recognize the many positive contributions being made to Latino literature by publishers and writers worldwide. The awards, which honor literary excellence in a variety of categories, will be given on Saturday, September 8, 2018.

Using iconic Latin American and Latino films as a guiding motif, these poems hauntingly illuminate Salvadoran immigration to the United States. González writes about a young boy’s experiences—first in El Salvador under the care of his grandmother and later living with his uncle in New York City. In each poem, famous movie and TV scenes featuring icons likes Pedro Infante and Cantinflas, and modern stars such as Elizabeth Peña, Edward James Olmos, and Esai Morales are juxtaposed with important moments in the boy’s life. Providing a tribute as well as a criticism of the way that film and television portray Latino lives, the collection is also notable for shedding light on the lives of so many youths raised by grandmothers in Latin America as the generation in-between went in search of the American Dream.

JOSÉ B. GONZÁLEZ was born in San Salvador, El Salvador, and immigrated to New London, Connecticut, at the age of eight. He is the author of the poetry collection, Toys Made of Rock (2015), based on his journey from a non-English speaker to a professor of English. His work has been anthologized in The Norton Introduction to Literature, Theatre Under My Skin: Contemporary Salvadoran Poetry and The Wandering Song: Central American Writing in the United States. He is the coeditor (with John S. Christie) of Latino Boom: An Anthology of U.S. Latino Literature (2006). A Fulbright scholar, González teaches Latino literature and creative writing at the United States Coast Guard Academy in New London, Connecticut. He is the founder and editor of LatinoStories.com and a member of the Macondo Writers Workshop.