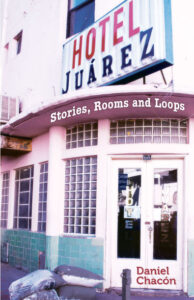 In Hotel Juárez: Stories, Rooms and Loops—Daniel Chacón’s new collection of short and flash fiction—misconceptions about people, the responsibility of the artist and conflicts about identity pepper stories that take place in the U.S. and abroad.

In one story, a girl remembers her father, who taught her to love books and libraries. “A book can whisper at you, call at you from the shelves. Sometimes a book can find you. Seek you out and ask you to come and play,” he told her. Years later, she finds herself pulling an assortment from the shelves, randomly reading passages from different books and entering into the landscapes as if each book were a wormhole.

In “Mais, Je Suis Chicano,” a Mexican American living in Paris identifies himself as Chicano, rather than American. “It’s not my fault I was born on the U.S. side of the border,” he tells a French Moroccan woman when she discovers that he really is American, a word she says “as if it could be replaced with murderer or child molester.”

Many of the stories are very short and contain images that flash in the reader’s mind, loopback and connect to earlier ones. Other stories are longer, like rooms, into which Chacón invites the reader to enter, look around and hang out. And some are more traditional. But whether short or long, conventional or experimental, the people in these pieces confront issues of imagination and self. In “Sábado Gigante,” a young boy who is “as big as a gorilla” must face his best friend’s disappointment that—in spite of his size—he’s a terrible athlete, and even more confounding, he prefers playing dolls to baseball. Whether in Paris or Ciudad Juárez, Chacón reveals his characters at their most vulnerable in these powerful and rewarding stories, anti-stories and loops.